To share your memory on the wall of Robert Nentwick, sign in using one of the following options:

Surviving with his wife are his children: Craig and his wife Sithida of Philadelphia; Melissa and her husband Richard Kessler of Pennsburg, and Christopher of North Lauderdale, FL; his grandchildren: Lindsey and Lucy Nentwick; his sister, Rebecca Standley Nentwick of Springfield, MO; and his lifelong friend, Bill Jones and his wife Kathy of East Liverpool, OH.

Due to the current health crisis, services will be held privately.

In lieu of flowers, contributions may be offered in his memory to St. Luke’s Hospice, C/O the Development Office, 801 Ostrum Street, Bethlehem, PA 18015.
Read Less

To send flowers to the family or plant a tree in memory of Robert Leo Nentwick, please visit our Heartfelt Sympathies Store.

Print
Due to the current health crisis, services will be held privately.

Donations are being accepted for: St. Luke's Hospice.

Posted Nov 22, 2020 at 04:07pm
Ken McIntosh
Bob was my Best Man when Carol and I got married. He was more nervous than I was and he had been through this before with his lovely wife Carolyn. While Carol and I escaped to go on our honeymoon Bob, Bill, joe and the gang had a great time at Red's Log Cabin. Wish we could have been there. Friends since high school we lost touch since I was transferred from state to state with my job and Bob moved from station to station. Bob and Carolyn were forever friends the kind when you get together you just pick up were you left off no mater how many years have past. No need to live in the past. Bob I did not know I'd miss you until I lost you. Good By My Friend.
Comment Share
Share via:
DJ

Posted Nov 17, 2020 at 01:31pm
Bob Nentwick and his entire family were our close friends for nearly 50 years. Bob was already 8 plus years into a HIGHLY successful radio career when I met him in 1974. I was just coming out of college and he guided me through the entry level years of radio and television. We worked together at a suburban Pittsburgh station then again in Albuquerque New Mexico. His wisdom helped me in moving on to San Francisco and Los Angeles.

Bob knew every corner of The United States and every aspect of commercial radio programming -- from popular music to classic rock to ultimately country music, leading him to the country music hall of fame in Nashville. He was a rare combination of warmth, humor, determination, and skill at his craft. People loved working for him and with him. He will be dearly missed by the hundreds (thousands) of people he touched.

Our sincere condolences to Carolyn, the children and his closest friends. 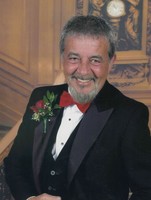