To share your memory on the wall of Michael Wampole, sign in using one of the following options:

Michael earned his Master’s degree at Villanova University in Library Science, and worked for the Perkiomen School until retirement in 2007. He was an author of the trilogy “The Infinity Games”. Michael was artistic and a fine Speaker, Writer, Photographer, Teacher. He always loved books and the written and spoken word. A good son and Family Man, Michael was so proud of his daughters and grandchildren. "

He is survived by his parents and daughters: Sarah, wife of Lance Crabtree who reside in Arizona, and Rachael, wife of Frank Hummel of Kunkeltown, PA; his grandchildren: Katelin, Maya, Tessa, Jacob & Michael; his siblings: Elizabeth, wife of Tor Wigert; Larry David, and his wife Maryanne; and Daniel, all who reside in Florida.

A celebration of his life will be held at a later date due to the pandemic. To offer online condolences, visit his “Book of Memories” at falkfuneralhomes.com.

In lieu of flowers, contributions in his memory can be made to the Perkiomen School, 200 Seminary Street, Pennsburg, PA 18073 for a Michael S. Wampole Memorial Bench.
Read Less

To send flowers to the family or plant a tree in memory of Michael Steven Wampole, please visit our Heartfelt Sympathies Store.

Receive notifications about information and event scheduling for Michael

Print
A Celebration of his Life will be held at a later date due to the pandemic.

We encourage you to share your most beloved memories of Michael here, so that the family and other loved ones can always see it. You can upload cherished photographs, or share your favorite stories, and can even comment on those shared by others.

Posted Sep 14, 2020 at 09:19am
Dear Rachel and Sarah,
Paul and I wish to make our thoughts to you. Mike was one of a kind, but we loved him with all
our hearts. We are so sorry for your loss. He and Janet were very special to us. God bless and we will
keep you all in our prayers. Carla and Paul Hausmann
Comment Share
Share via:
RF

Posted Sep 07, 2020 at 10:47am
Michael and I spent many long nights working on his book that finally made it ti publication. He was very well known and a one of a kind great person. He made friends everywhere he went. A great sense of humor and way of dressing that was a bit out of the norm. He loved his kilts!!! We will miss him.

Posted Sep 06, 2020 at 12:45pm
We will always remember Michael's creative spirit - especially the old fire truck spa and his love of Halloween. We last saw him at the Philly Folk Fest, when our son was a teen. An awesome man. Love to his daughters.
Comment Share
Share via:
N

Nancy E Lauterbach I remember Michael so well while we were college students at Lock Haven State College. He was one of the most friendliest and fun people I ever met. He always loved to hang out with his friends like Irish, Doc , and Maura and I was with them all. We were very close back then. The last time I saw Michael was when he came to John LaRose’s memorial and that’s the picture I added. I will miss his laughter and good spirit . 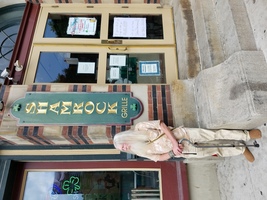