To share your memory on the wall of Gene Renninger, sign in using one of the following options:

Gene worked for Fowler and Williams for over 35 years. He pitched on a recreational softball team in Montgomery County for many years until, due to age, he switched over to enjoying golf.

At his request, there will be no service.

Falk Funeral Homes & Crematory, Pennsburg are in charge of arrangements. To offer online condolences, visit his "Book of Memories" at falkfuneralhomes.com.
Read Less

To send flowers to the family or plant a tree in memory of Gene Paul Renninger, please visit our Heartfelt Sympathies Store.

Receive notifications about information and event scheduling for Gene

Print
At his request, there will be no service.

We encourage you to share your most beloved memories of Gene here, so that the family and other loved ones can always see it. You can upload cherished photographs, or share your favorite stories, and can even comment on those shared by others.

Posted Jan 19, 2021 at 09:36am
Kathy, I am so sorry for your loss. I remember when your dad would drop us off at school. I always remember the smell of his cologne!
Colette Rau Walbert
Comment Share
Share via:
NB

Posted Jan 17, 2021 at 05:05pm
Neil Brunner
Gene was my tenant in Emmaus for over 10 years. He was a very friendly and helpful person. We had many good times
together. Gene and Eleanor were very good tenants. I will miss him.
Comment Share
Share via:
DH

Posted Jan 17, 2021 at 10:26am
I started to get to know Gene about 6 years ago. He started coming over to my mom’s house after Howard Ferguson passed in 2013, Gene golfed with my father, James Hohl and Howard for many years, and my parents used to go to the golfing banquet and knew both Gene and Eleanor. My dad passed in late 2008, and Gene lost his wife in 2009, so they were both widowers who lived alone.
Gene and my mom Sandy became great friends and kept each other company for the last seven plus years. They hung out in the carport and in the house when it was cold. They sat and watched Jeapordy and Wheel of Fortune, and then the news. They chatted about the news in the paper, past memories and stories, family happenings, and joked around a lot. He read the newspaper front to back, including all the obituaries every day, which still amazes me. He helped my mom in her garden, and ate a lot of what she grew there over the years. He loved his vegetables. He sometimes took her to appointments, checked on her house when she was away, cleaned up her garden, and my mom cooked meals for him that they shared together.
When I would come to help my mom, Gene came over and I started getting to know him. His stories from his childhood, from serving in a tank in the Korean War and his Pennsylvania Dutch background were all fascinating and I always looked forward to seeing him. He used to enjoy hunting with his brother, and we talked about hunting together as my husband hunts and we process our own meat. We would have a beer together and he often brought me a case of Yuengling to thank me for cooking meals and anything else I had given him. I enjoyed hearing him speak Dutch, which I had never heard before and probably won’t again.
He taught us about planting parsley to attract butterfly caterpillars, and how to keep them over the winter. We witnessed them turn into cocoons and then emerge in the spring into butterflies which we released. I never would have seen that without knowing Gene.
Gene accompanied and my mom and I to some movies, the 12th Night Christmas program in Allentown, a Sight and Sound play in Lancaster, Weavers Hardware Store and he showed us the church where he was married. We joined him to eat in East Penn Diner where he was well known and appreciated by the staff there. He was always friendly and joking around with everyone. He often would pay for a meal for someone else in the diner, and always insisted on buying our meal. We would all sit in my mom’s carport until dark in the warm months and chat about everything. He always brought something over to my mom, from fruit, cookies he made, and different desserts.
Gene was a Korean War Veteran who served in a tank for years, living together in it with 5 men. The conditions he described from that conflict were extreme, but he returned home and lived a full life. He was always in mind of all the KIA Korean War soldiers who were never returned home to their families.
His childhood sounded very difficult, and he spoke of his different brothers and sisters over the years. I enjoyed seeing the few photos he brought over of his home as a child and some schoolhouse pictures.
Our deepest sympathies go out to his children, grandchildren, his remaining siblings and his friends.
It was my absolute honor to have known Gene Renninger. He was one of a kind, and a wonderful person. My life is richer for knowing him. My mom and I will miss him dearly.
Rest in peace my friend. I look forward to seeing you again.

Posted Jan 13, 2021 at 07:10pm
Gene P. you were a fantastic FIL and wish I could have been the husband you were to Elinor .
Grandfather to all the kids and and father to your girls .
Butter Valley will miss your feet on its grass.
Thanks for all you were to everyone .
Comment Share
Share via: 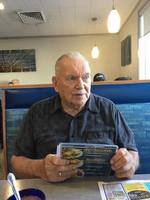 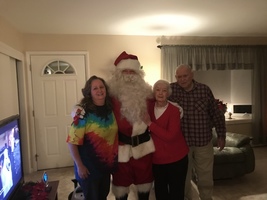 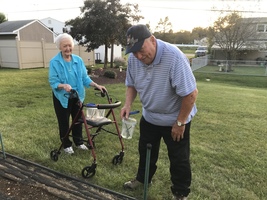 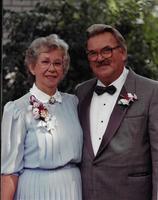